2011 is coming to a close.  I think it has been both the longest and shortest year of my life; never-ending days of hospitals, chemo and sick baby, alternating with the non-stop appointments, blogging and changes.  I thought I would do a little review of our year, to help us look back on all the events that have shaped the last 12 months.
Scarlett' Year in Review

Last night, we began round 11 of chemo.  This is the second-to-last cycle, and the last of the nausea-inducing, immuno-suppressive stuff.  I can hardly believe we are this close to the end!
Not much else to report these days.  Scarlett and Chris has both had pretty bad colds all week; I have been fighting it off with every homeopathic tea, drop and pill I can find.  Luckily, it was the quietest week we have had in a long time since all of Scarlett's therapists are on holiday breaks.  Just one appointment this week for labs, clinic and chemo pick-up, though it did take about 5 hours from start to finish!
We got the official results from last week's follow up MRI that there has been no change in her shunt problem, so we are clear to proceed with the last months of treatment.  This puts is one big step closer to the harrowing reconstructive surgery scheduled for next summer.  We should be seeing the neurosurgeon in January to begin the planning process for that.
We don't have much planned for New Year's.  Chris has to work the closing shift Saturday, then open on Sunday, so no hard partying for us!  We hope to see a few friends and some family, maybe have some champagne.  Honestly, I'd rather keep Scarlett on her regular schedule than try to go out!
Just a reminder: If you gave blood with us in October, you are likely clear to give again!  If you are in the Bay Area, the Stanford Blood Center has been fantastic to work with, and they have a few locations on the Peninsula.  If you can't make it there, check with the Red Cross to see where you could donate. Chemo doesn't stop for the holidays, so patients need blood all year round, and donations are slower this time of year.
Posted by Brandi Wecks at 8:14 AM 4 comments: 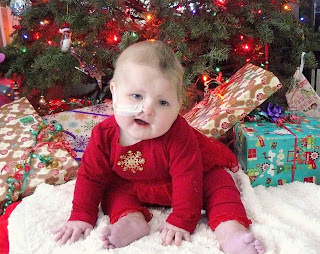 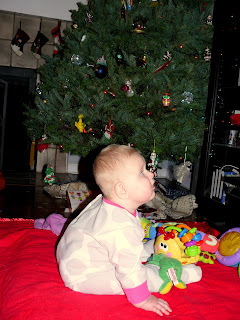 Scarlett is now 14 months old.  She weighs 20 pounds, 2 ounces and is about 28 inches tall - about the 10th percentile for height, 20th for weight.  She has 8 teeth, with 4 coming in (for the last two months!!).  Her hair is now more than an inch long and honey blond.  She can sit on her own without falling over (too much).  She can roll over from her back to her stomach, but only when someone important is looking (never just at home!)  She puts EVERYTHING in her mouth - paper, toys, her fingers, other people's fingers, iPhones, and her personal favorite, small pink hearing aids.  She loves to play Peek-a-boo, hang upside down and shake her head no-no-no-no with a big grin on her face.  If you are really lucky, you can catch her waving.  She will only eat from a spoon if she can hold it herself, and completely refuses any bottles or formula now (no milk, Pediasure, water or juice either.)  She loves Christmas music, just like last year, and starts kicking and waving her arms as soon as any music starts.  She sleeps every night from about 8:30 until 7:00 am, thank goodness, because when she is awake, she keeps us BUSY! 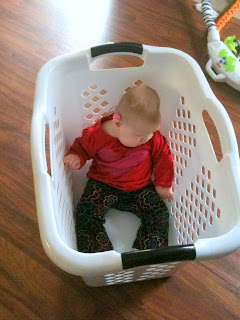 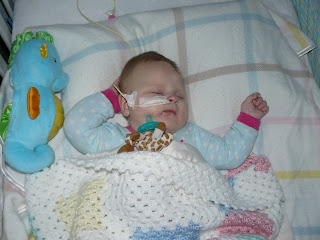 It has been exactly one year since Scarlett was diagnosed with congenital glioblastoma multiforme, an aggressive malignant brain tumor.  One year ago, we thought everything was fine.  One year ago, we knew almost nothing about cancer, chemotherapy, hospitals or therapy.  One year ago, we were told our daughter was going to die before her first birthday.
We have come so far since that horrible night one year ago.  We have learned to fight for our child, against widely respected doctors, pushy nurses and systems that try to exclude her.  We have stayed positive, somehow; I can't really explain how, but we have never really accepted the darkness and have kept Scarlett's life filled with laughter, even when we are surrounded by sadness.  And, through something that could have torn us apart, Chris and I are closer than ever.  We are determined to make some good from all this, so we can look back with Scarlett when she is older and show her how amazing her life has been and how much good she brought to the world.
We are so grateful for the doctors, nurses and other medical providers who have worked with Scarlett over the last year.  Her continued development and relative wellness is to their credit.  We are also thankful to everyone who has been so supportive - our families, friends, community and all of you who have been reading about Scarlett all this time.  It has been amazing to see how far Scarlett's story has reached - nearly 2.5 million pageviews, readers on 6 continents, more than 5,000 comments, two Facebook groups (one with over 3,000 members), boxes of cards and gifts, hundreds of e-mails and thousands of dollars in donations that have kept us afloat for the last year.  We are so lucky, so grateful and so thankful for everything we have today.  We could not have done it without you.
We are far from the end of this fight.  Scarlett will have another MRI at the end of the month to monitor her shunt drainage, and we still have two months of chemo and a few surgeries planned for 2012. We are bracing for another difficult year, but we know we can make it.
Posted by Brandi Wecks at 10:45 AM 16 comments:

Last weekend, we began decorating for Christmas.  We got a tree on Saturday (we're a fresh tree-only family - no plastic trees!)  Digging out the decorations and going through the ornaments has brought a lot of old feelings back to the surface.  One year ago this month, Scarlett's tumor was discovered (click here to read the story from the beginning).  We had been preparing for her first Christmas, making plans to see Santa, make cookies and visit friends, when we were hit with the most horrifying news of our lives.  After a week in the hospital and a biopsy confirming a malignant (cancerous) tumor, we were sent home on December 23, 2010 with the instruction to wait for a call from hospice after the holiday, and the distinct impression that there was nothing else to be done.  It set a dark cloud over our holiday festivities, to say the least.


Luckily, we now know that those doctors didn't get the last say, and we have our beautiful, wonderful little girl to celebrate her second Christmas.  Now, as I hang the embroidered stockings we had made last year, the ornaments we rushed out to buy at the last minute so they would be on the tree for Christmas Day, and I see the haphazardly-packed trimmings, thrown into boxes as we cleared them away before surgery, I can't help but remember how different last year was.  Last week, when we saw Scarlett's NP in clinic, we were discussing the plan for December, and I just broke down at the thought of it all.  It has been such an overwhelming experience (that is nowhere near an end) and the magnitude of it is not always in our immediate thoughts, and every once in a while something will trigger a memory of how close we came to disaster.

To help distract us from the sometimes-upsetting feelings, we are keeping busy.  Last week, we got to go to the Dickens Christmas Faire thanks to our lovely friend Grace.  We have two birthday parties, a graduation party and a Santa visit this weekend, plus we're making time to see Christmas in the Park, as many lighted houses as we can find and maybe even some caroling.  I have cookies to bake for an exchange party, doctor/NP/therapist gifts to prepare, shopping and wrapping on top of the regular 5-a-week appointments.  Oh, and my car needs a SMOG test.  If that doesn't keep us distracted enough, we can always do this:

This week has been a little crazy thanks to Scarlett's knack for surprising us at every turn...like always, it's her show, and we're just trying to keep up!
Last week, she had her scheduled MRI.  It was clear of any tumor (yea!).  It was not, however, "normal".  I learned this at her clinic appointment last week, where I thought we were just going to do the regular labs and check-up; apparently, our NP thought she gave Chris a heads up when she called, but all he really absorbed was that the MRI was clear - can't blame him on that!  It turns out we had a little more to discuss.
After we covered the basics - feeding, medications, generally well-being - she pulled up the MRI images on the computer.  Once again, I could tell immediately that there was something off about what I was seeing.  What was once a very balanced looking brain scan is now lopsided.  Here's what happening (as best as I understand it, at least):
Scarlett has almost no left brain hemisphere.  The small portion of left hemisphere tissue that did grow around the tumor has begun to shrink; it is assumed that it is not very useful.  Her right hemisphere does everything that needs to be done for both sides, and it is growing.  The growth is normal and healthy (yea!) but it is being complicated by the shunt.  Her shunt is over-draining spinal fluid from the empty cavity in her head, therefore not putting any pressure on the growing right side.  This has led the right side to follow the path of least resistance and grow onto to the left side of her skull.  Her head circumference has not changed in almost a year, since the swelling from surgery went down.  This is because brain growth stimulates skull growth; with her brain growing into the other side, it is not creating the pressure to stimulate skull growth.  Since the caved in left side is still very flexible, the change in brain position is causing the bones to shift, resulting in the lump on her forehead.  In addition, a portion of the healthy right side is beginning to rotate on itself as it grows into unrestricted space.
In a normal brain, this would be very bad.  Any neurosurgeon would panic at the sight of the scans.  Luckily, they weren't shown to the surgeons until later.  The Scarlett twist is that the little miss is showing absolutely no symptoms of this change.  We are on the lookout for neurological changes - sleepiness, irritability (beyond the three teeth breaking through right now...), eye responsiveness, weakness, etc. - but we're otherwise in a holding pattern.
Eventually, something will have to be done to the shunt.  We're hoping it can wait until her reconstructive surgery in the summer so everything can happen at one time, but it will depend on what happens over the next few months.  A variety of options have been discussed, including stopping chemo after the current cycle to get her closer to surgery, but we will just have to wait and see.  It is always best to avoid extra surgical interventions when she is in chemo.  However, if it needs to happen, it will.
Now, how many of you know that much about YOUR kids' brains?  :-)
Posted by Brandi Wecks at 9:39 PM 4 comments: