Like I mentioned last week, I took on a little project for Scarlett's Valentine's Day.  Since she will be going in for her g-tube surgery that day, I thought it would be fun to have something festive to wear.  After a little internet searching, fabric shopping, cutting, sewing, re-cutting and re-sewing, I came up with this... 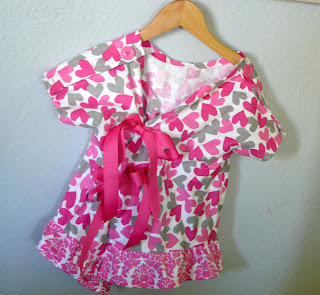 It's an itty bitty Valentine hospital gown!  I got the pattern from Lazy Girl Designs, who offers an adult and a children's pattern free for personal or charitable use.  Since their pattern only came as small as a 2-4T, I did a little snipping and clipping to make it fit Scarlett, who is still in 12-18m. 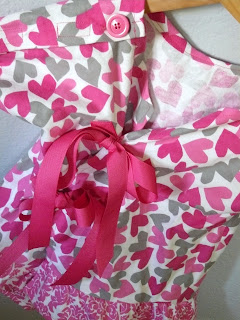 The details were very simple - just some velcro (I used the super soft kind, rather than the regular so it would be more flexible) at the top of the shoulders, two buttons and some ribbon ties.  I used flannel so that it would be as soft as possible, and I added the contrasting ruffle just to be fancy.  The pattern includes a buttonhole for heart monitors to pass through, but I chose to leave that out for now.
And, since I had plenty of fabric left over, I made a (much simpler) matching gown for her new doll... 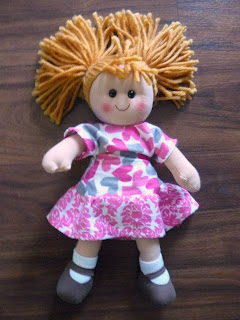 ...who will also soon be sporting her own g-tube, thanks to the tutorial I found here.  I will also add some felt hearing aids as soon as I get back to the fabric store to grab some pink felt.  She has never really been interested in dolls or soft toys much, but she LOVES the yarn hair on this doll (which came from JoAnn Fabric, too). It is important to me for Scarlett to have at least one or two dolls or toys that have the same "accessories" as she does.  As she gets a little older, I found someone who makes adorable custom dolls that can have any medical equipment your child has, including a shunt "bump", prostheses, braces, amputations, scars, hearing aids, cochlear implants and more.
Since we'll only be in the hospital for 1-2 days this time (at least, that's the plan), we'll test this gown style and see if it works for her.  If so, I plan to make her a few fun ones for her big surgery in May.  It makes me feel a little better about spending time int he hospital if we can make it fun for her just a little.
Posted by Brandi Wecks at 1:14 PM

That is SO sweet! She is going to melt some hearts in the hospital wearing that, though I'm sure she already does.
It's good to keep hearing Scarlett's updates and progress.

That is adorable and I am sure she and the staff will love it!

I also think it is great you are drssing her doll up too she can a doll comparable to her.

Scarlett is so lucky to have a mommy like you! She is going to be so precious in her gown made by mommy. I am so impressed by your talent, and to make one for her dolly too....it's beyond words. I am praying for you, your husband and little Scarlett always.

That is so awesome! We are searching for a doll that has an opening that we can cath..to prepare Peyton since she loves dolls right now. Is your maker online or someone you know in real life?

I can't get over how cute that gown is!

So awesome! I love the gown, it is perfect for Valentines day. Scarlett is adorable no matter what she is wearing, of course. It is so wonderful that you can make her something special like that. I'm always keeping you and your family in my thoughts.

You're an awesome mamma!

The doll maker is at www.karenskottage.org - you can click the green words in that sentence to go straight to her order form.

this is so pretty!!

Brandi, you are literally the best mom in the world.

Oh my gosh, that is so cute! I hope everything when well with the surgery.

How did the g-tube surgery go?

I hope the surgery went well with her. If she gets cured, she won't need to wear hearing aids and play and talk like any other child.