For the last 3 years, we have been working on fixing Scarlett's skull.  It's finally time for the last step!

School was canceled today due to stormy weather (the first time I have ever heard of that around here).  I got to go with Chris and Scarlett to both appointments - neurosurgery in Walnut Creek and neuro-oncology in Palo Alto.  Unfortunately they landed on the same day, and there was no way to reschedule.  We drove a lot, in sheets of rain, with lake-sized puddles on the freeways, but we made it to both appointments.

First and foremost, the neuro-onc appointment confirmed what we have waited two weeks to hear - her MRI is clean, no signs of tumor!  Hooray!  The rest was a lot of catching up, us sharing all the great things Scarlett is doing, blah blah blah.

With the neurosurgeon, we discussed his plan for surgery.  A little history...

At 6 months old, Scarlett's first shunt failed.  It was removed and replaced with a new one...the wrong one.  The wrong shunt (a non-programmable type) over-drained and, since her skull was still healing after the tumor was removed from below it, it collapsed.  She was in no pain, but too sick from chemo to undergo the surgery to repair it. 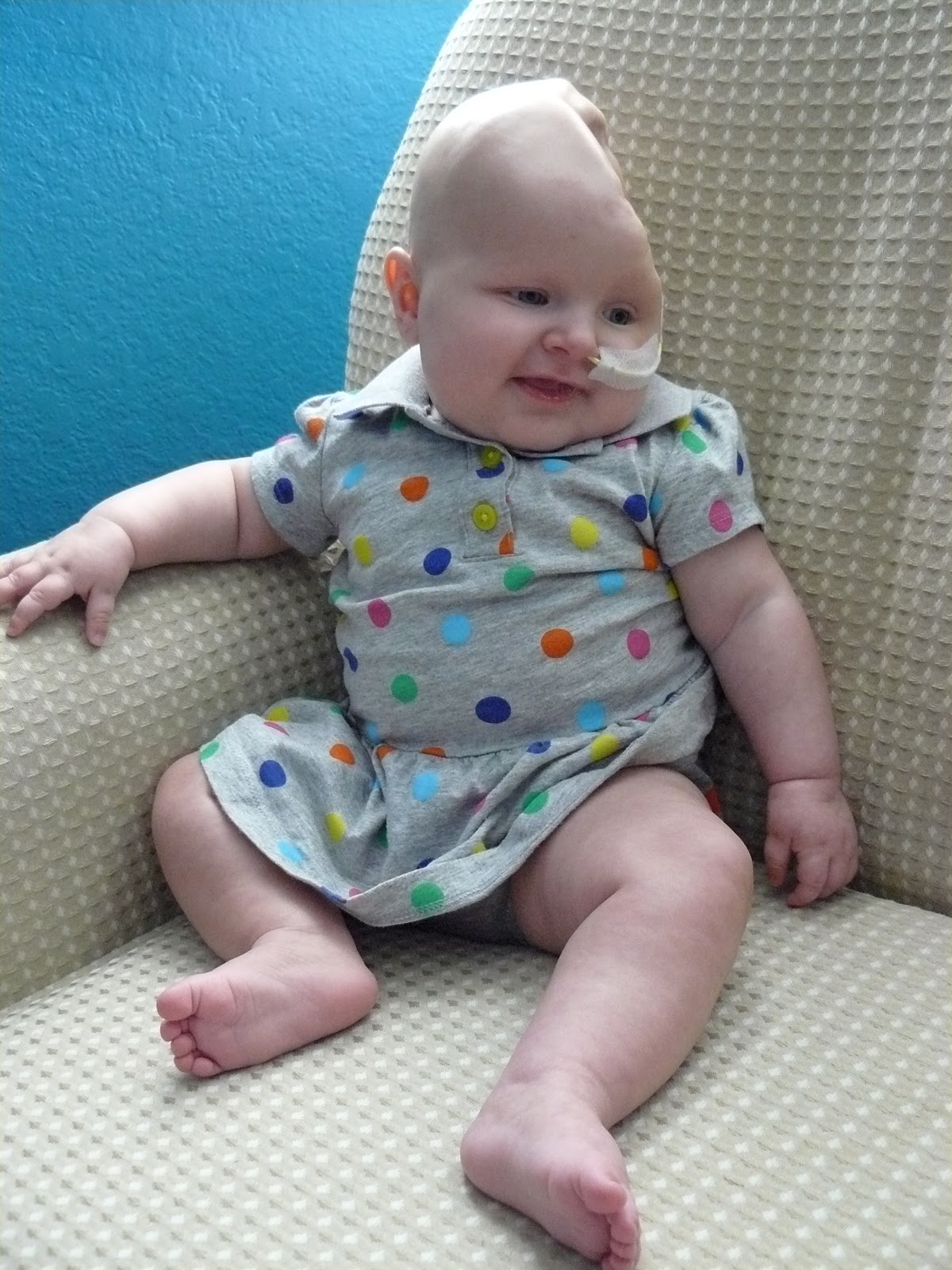 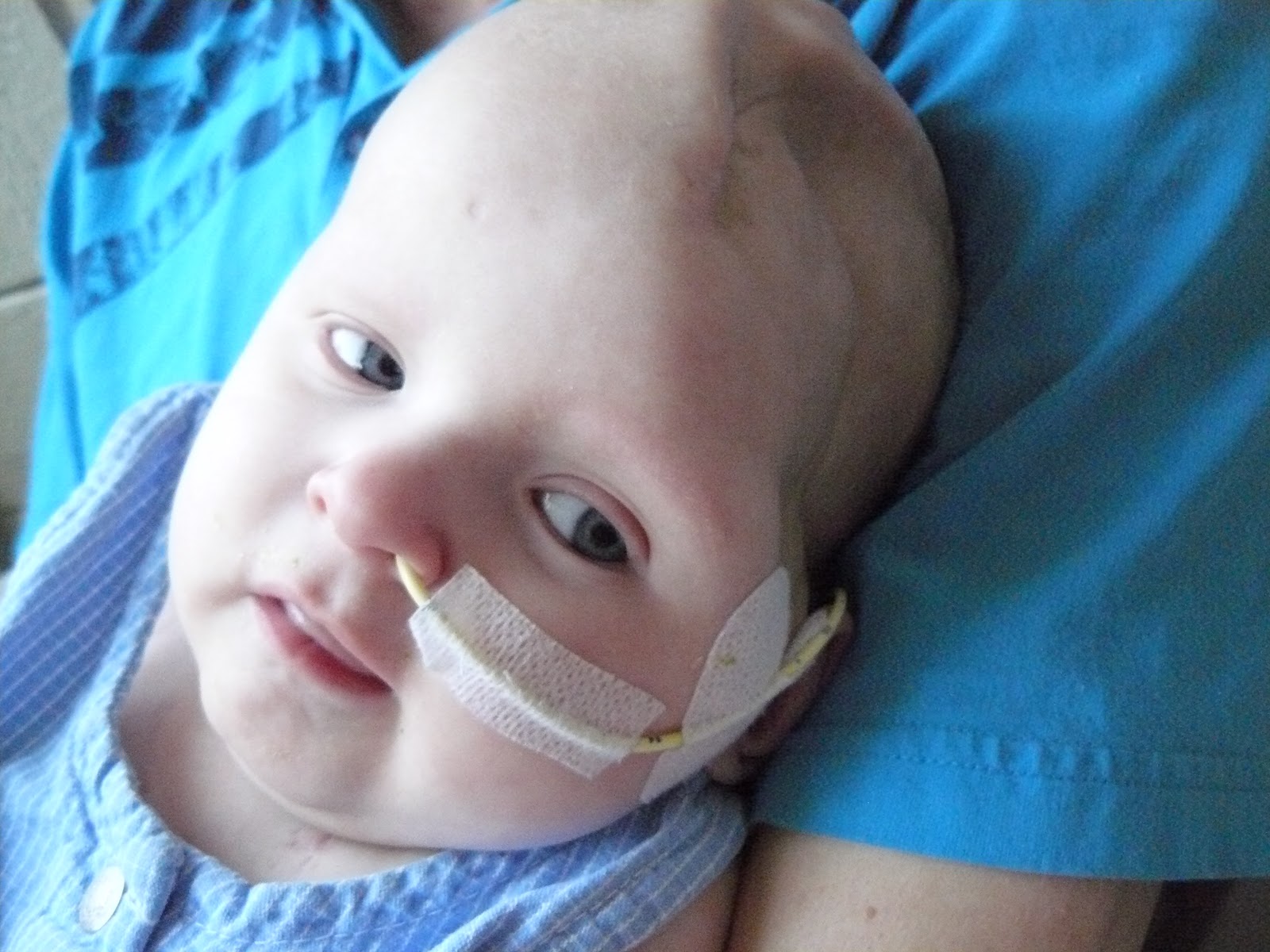 After chemo ended and she was safe for surgery, we had the first cranioplasty.  At that point, her skull looked like this: 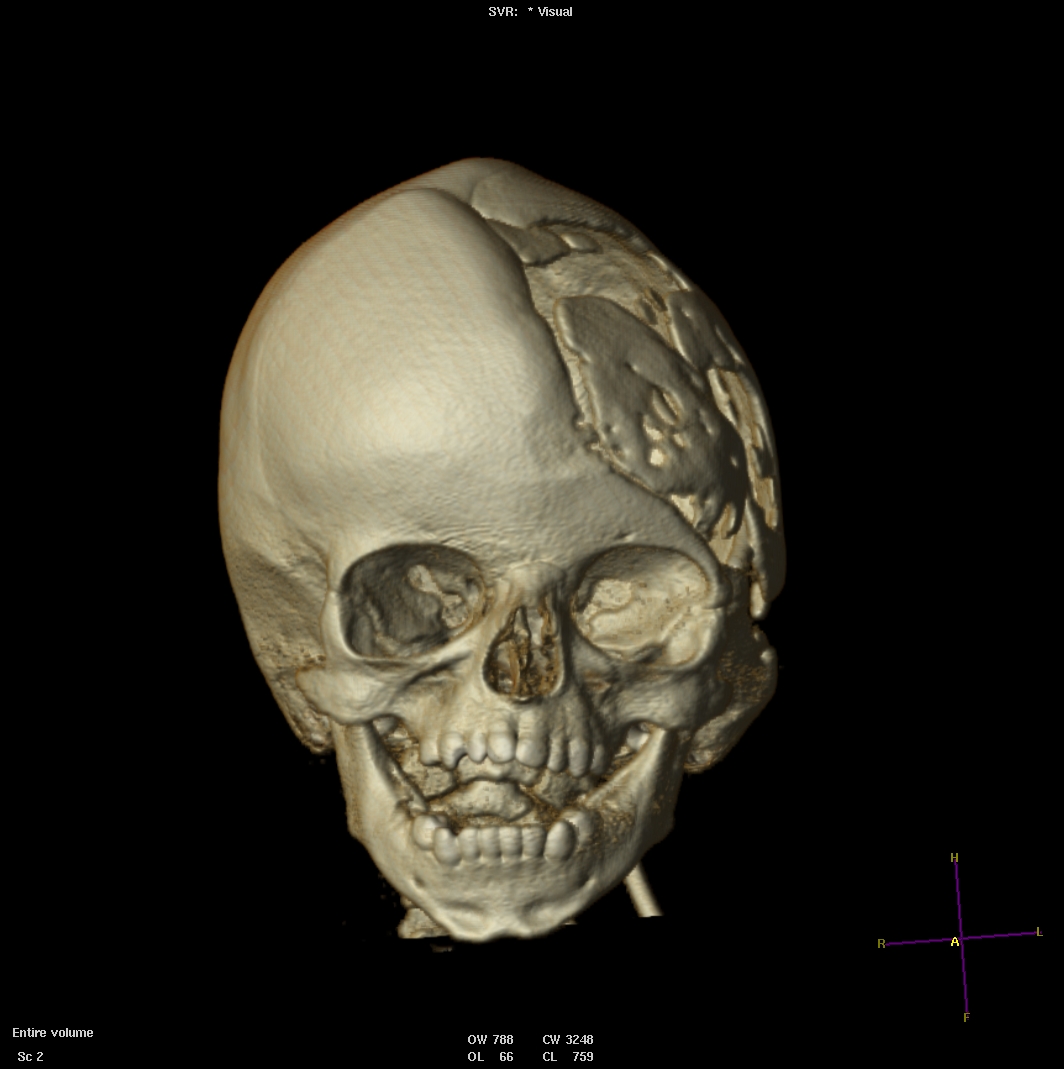 At about 18 months old, she had surgery to reset some of the bones in her skull to allow them to heal and grow correctly.  Her head was relatively round, a fact her neurosurgeon is very proud of. 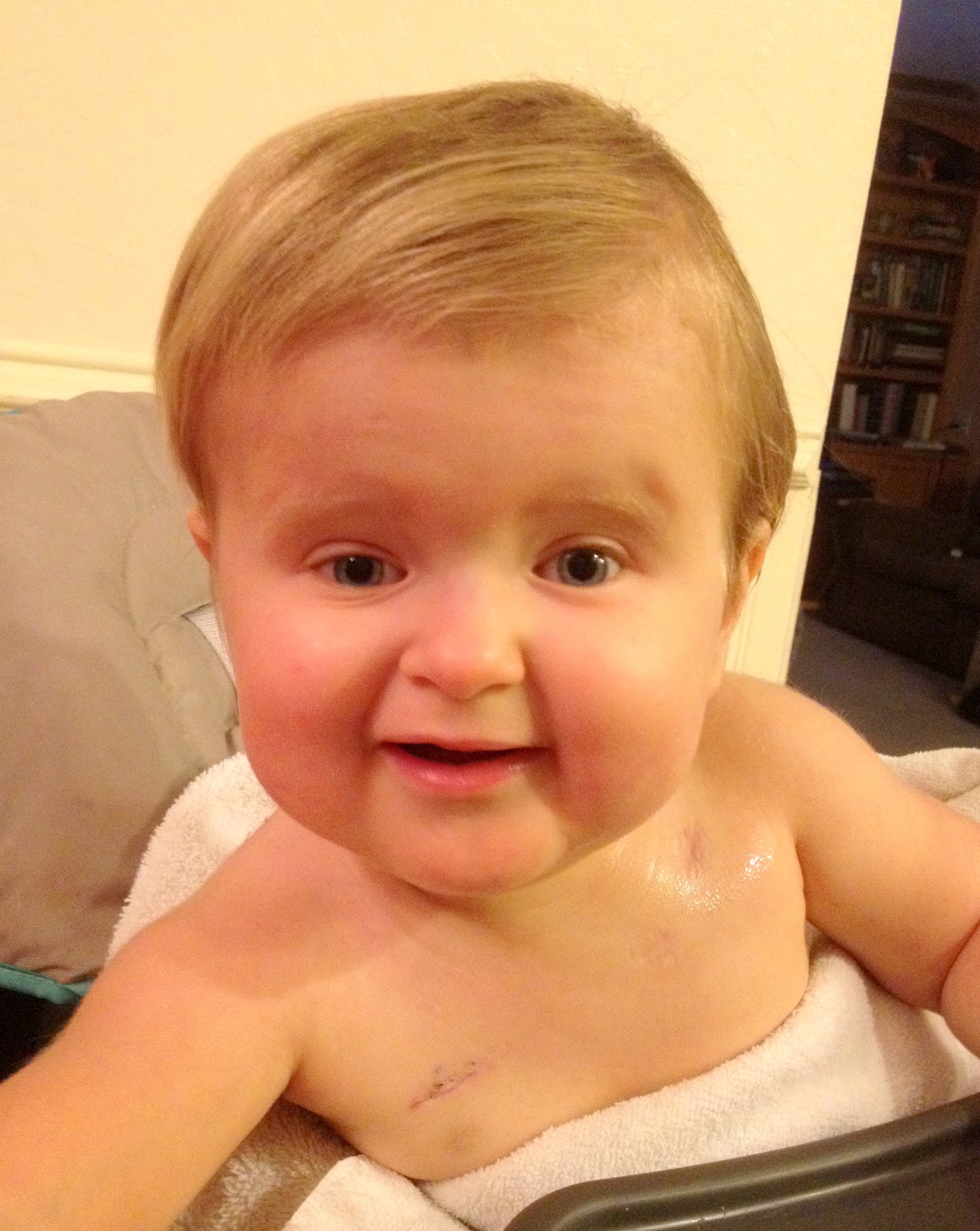 Then came the relapse.  More tumor, more surgery to remove it, more chemo.  During that time, the bone as not able to heal correctly, so it started to collapse again.  It is not as serious a it was, but needs to be repaired.  This was scheduled for June, when we were all out of school...until the explosions of seizures the week before. 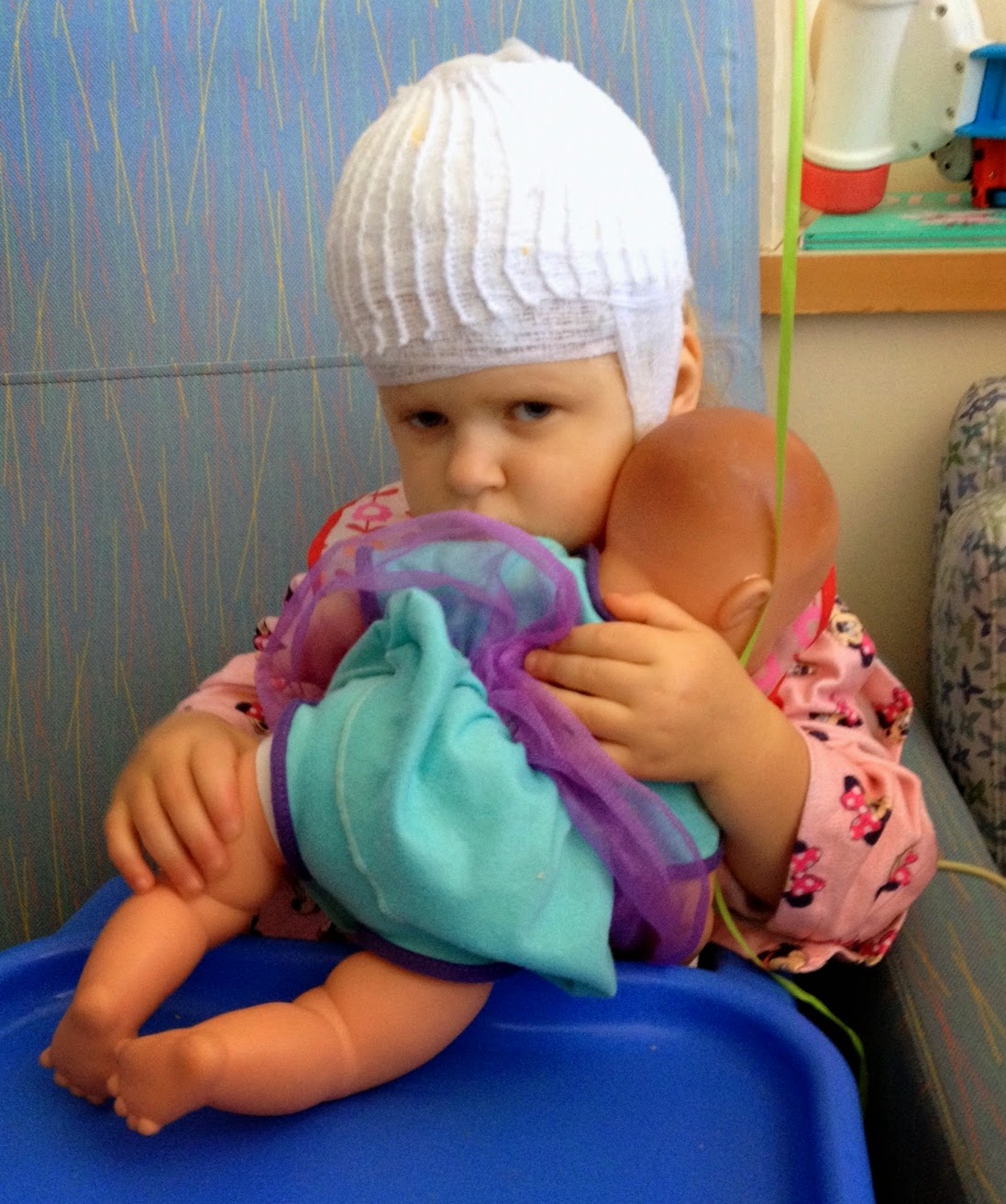 We all decided that we needed to know where the seizures were going before we decided to go in for surgery - it was a possibility that she would need some type of surgery for the seizures, and we did not want to do anything twice, or that would put the new skull into jeopardy.  So...we waited.

Now, it's another school break.  Scarlett and I are both taking the last 4 days before the holiday break to have surgery.  On Tuesday, December 16, she will go in for her 15th surgery (1 biopsy, 2 resections, port, a bunch of shunts and repairs to shunts, g tube, first cranioplasty, another shunt, another resection, another port).  The surgeon is hoping to be able to use her own cranial bone to create some new bone (some sort of splitting and mesh-making...I don't really get it).  He is not sure that her bone is thick enough to be used in this way.  If it is not, then he will use a bone paste to create a new layer over the current hole.  Either way will allow her skull to grow more normally, and be safer when she falls.

He is very optimistic that she will be out in two days...I think we will be happy to be home by the weekend (when he leaves for vacation!)  From our previous experience, Scarlett will have some major swelling and need heavy duty pain medication for a few days.  This was difficult with a one year old the last time around...now she's 4.  She can walk, climb and fight against us (and the nurses).  She is starting to have some fear of doctors offices and medical procedures (like blood pressure cuffs) that were previously not a problem for her - which is normal and typical for a preschooler.  It's going to be difficult for her and us.

The good news is that, since this is the last surgical procedure we expect her to need - maybe ever? - she will have her port removed in February.  We already made the appointment, so it's on the books!  She has had a port for all but about 6 months of her 4 years - she is ready to have it out of her chest!  Once that is done, we will only have MRIs and regular-kid maintenance, along with check-ups.  No more huge surgeries looming over us for years at a time.  Hooray!!

The reward for all this hard work is Christmas!  We will get out of the hospital and it will be time to finish (start??) wrapping gifts and baking.  Every year, Christmas seems to be the time when everything comes down on us...this year, at least it is planned and expected.

Our decorations are up, most of the gifts purchased, and plans for family fun in the days around Christmas are planned.  We just have this one little thing to get out of the way first.

It's amazing how well she is doing and how far she has come. Congratulations!

I hope the surgery and healing go smoothly and quickly.

Excited! Sad that it takes pain to get there, but glad there is a 'there' to get to! All the best and may she have a speedy recovery.

Best of luck! I've been following her story since the beginning and I'm so happy to see how well she is doing!

It is so amazing what modern medicine can do! Praying for Scarlett and her surgeon and no pain!