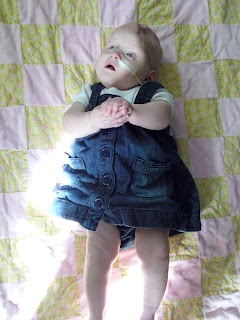 Scarlett is 8 months old today!  She is about 15 pounds, 4 oz. and 25 inches long.  She likes to watch Signing Time and Sesame Street while momma does the dishes.  She kicks anything that comes near her feet, and beginning to push back when we put any pressure on her feet.  She has one full tooth, and two others on their way through.  She still doesn't eat much in the way of solids (or formula, for that matter) but she is improving a little every day.  She gives the biggest, drooliest smiles and is generally happy most of the time.  Everyone has noticed how much more interactive she is lately, which I think comes from being home so much more than she has been in 6 months.
It has been 6 months since her brain tumor was discovered in December; 5 months since the tumor was officially removed.  She has had 8 surgeries, and about 90 days in the hospital.  We have come so far, yet have a long way to go.
Her MRI has officially been given the "all clear" by both neuro-oncology and neurosurgery!  No tumor!
Her right brain hemisphere has decompressed well and looks relatively normal now.  Her current shunt (her second) is over-draining, which is causing the bones of her skull to collapse inward.  While this does not bother her too much, her neurosurgeon has decided that it will need some attention - a few surgeries (including a third shunt) over two weeks later this summer.  The two teams will have to negotiate to find a good time - between chemo cycles but before she is one year old (bones heal better before one year).  While more surgery does not sound fun, we want to make sure we do everything we can now to ensure her life is as normal as possible when she is older.
She begins the next round of chemo next week, so this weekend is our chance for a little fun - hopefully we can make it a nice Father's Day for Chris!
Posted by Brandi Wecks at 5:51 PM

All clear!! Yea! What good news!!
Thanks for your continued updates. Your family continues to be in my thoughts.
-- christa (oct 2010 mom)

I got chills when I read that "all clear"!! Such great news! Happy 8 month birthday to Scarlett!

I have been following your blog since you found out about the tumor in December. My Abigail is 2 months older than Scarlett. All clear, no tumor!! What amazing words. Continuing to keep you all in my thoughts and prayers. Hug that little angel! May God bless you all.

What happy news! She is just to precious for words.

What wonderful news! Glad she has been given the all clear! God is on your side!

What a WONDERFUL post!! So happy to hear that all is clear and that Scarlett is enjoying doing some plain ol' normal baby stuff! Love the video...such a cutie pie!!

I've also been following your blog for quite awhile (a fellow Oct 2010 mom). I just had to say a huge CONGRATS on the wonderful news!! And, the pic with the shades is just way too adorable!! :)

OMG that video is so cute! I just adore Scarlett. So glad she is such a trooper. I wish I could give her a big hug. Awesome news, what a great 8 month present!!!!
By the way the sunglasses picture is the best. Made me smile.
As always you guys are in my thoughts.
Be brave, be strong, keep fighting
Love,
Christina and Kaitlyn

So glad that there is no tumor! Wonderful news! Thanks for faithfully updating your blog, so i can continue to pray for your family.

YES!!!! I am SO happy to hear there's no tumor!!! This news has made my whole week brighter!! Go Scarlett Go!!!
Have a happy, happy father's day!!!

Congrats!! on the All Clear, NO Tumor! AWESOME news! Happy 8 months to the little Miss! She looks and sounds like she is just doing wonderful and striving along beautifully! She is an amazing little girl with extra amazing parents! I hope you all get to enjoy more time at home! Thanks for the most wonderful way to start the weekend! Sending Love and Prayers from the Cozza's in CT.

Now I'm having a good day!!! By the way she is working that Jackie O look. Lock the doors Chris ...

What wonderful news... the tumor is gone! Scarlett is so cute! Have a great Father's Day!

Happy eight month birthday to Scarlett! We are so happy to hear the "all clear!" You all remain in my thoughts and prayers.

Wonderful news! Your post made my day! :) Happy happy 8 month birthday to Scarlett!!! She is just beautiful, and that picture is classic. My whole family is thinking about you all and rooting for your sweet girl.
<3 from the Meadows in FL

HELLO! My name is Heather and I'm a 23 year old mother to a 19 month old daughter. I live with my boyfriend and our sweet child. I want to tell you that Scarlett is such an inspiration. Yesterday after an MRI, I was diagnosed with a brain tumor that is deep in the brain. I am scared out of my mind right now and knew I had to come back and read Scarlett's story another time. (i first read it months ago) To see such a small, precious life going through this and pulling so much strength really gives me so hope. I am still dealing with the shock of it all but I hope I can find doctors as wonderful as Scarlett's and pull from the love, strength and support that everyone shows!

God bless Scarlett and your family!

Wonderful news! Hope you all have a fantastic Father's Day!

What a beautiful little angel. Your story has touched my heart. I found your blog on Picket Fence.