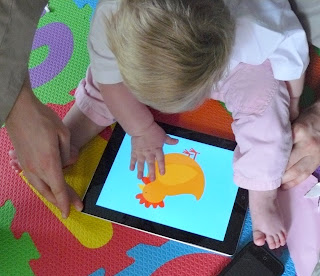 Scarlett is the proud owner of an iPad, thanks to Children's Wish Foundation International.  Most of the wish organizations, like Make-a-Wish, require children to be 2 and 1/2 or older, or able to describe their own wish.  This makes sense - the wish should be for the child, not the parents.  However, Children's Wish Foundation International has a special wish program for kids who are under 3 (or whose cognitive level is below 3) to provide stimulating toys, music, videos or games for them to enjoy.  Our hospital social worker wanted Scarlett to get the chance to take advantage of this opportunity, so she passed the application on to us.

There were a variety of options, including a collection of books and a rocking chair, a collection movies and a dvd player, a collection of music and a stereo, or a family party, but there was also an Apple iPad.  We had been looking into getting an iPad for Scarlett for a while, but it was way out of our budget.

Technology for kids with special needs has come a long way, especially since touch screens and apps were introduced.  There are speech and language programs, occupational therapy and fine motor programs and plenty more.  I have seen kids using iPads for visual assistance from a wheelchair, for overstimulation calming and plenty more.  Living in the Silicon Valley, we see these types of technology all around us.  Despite this, we have always been hesitant to "plug her in" to too much screen time.  I'd always prefer to see her banging together blocks or chewing on a slinky (as she is as I write this) that staring at a screen.  We use our phones to show her pictures or for minor emergency entertainment in waiting rooms, but never leave her to play on her onw (frankly, she'd prefer to chew the silicone case than watch anything.) However, Scarlett's teacher from the Center for Early Intervention on Deafness (CEID, where she attends class each week) was planning to bring one of the school's iPads to one of our home visits to see how Scarlett interacted with it.  Then the CWFI opportunity came up, and we all thought it could be beneficial as she got older.

So, even though it seems pretty indulgent for her to have her "own" iPad, we wanted to take this opportunity while it was available.  We asked our social worker to send it is ASAP in hopes we would have it ready in time for Scarlett's upcoming surgery, and CWFI was happy to help. 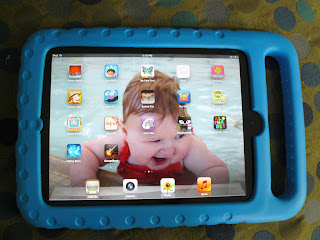 For the last few days, we have been working on setting it up for her use.  First, we bought a sturdy rubber case from Target (by Phillips) and added a plastic screen protector to prevent too much drool damage.  Then we investigated what apps to add.  The speech therapist at CEID helped me find some that they use on the school's iPads, and now we have a pretty good variety, mostly all free.
There are so many, many apps.  Some aimed at toddlers are completely developmentally inappropriate, but others can be engaging for their short attention spans.  Many are expensive, so we are holding off until she is a little more advanced (unless we really like it).  Scarlett's physical therapist also suggested checking out AutismApps for other special needs-focused apps organized by type. We'll keep the hunt going.

Finally, I wanted to get at least a few movies for her to watch while she was cooped up in the hospital.  She will likely be immobilized for at least a few days, so I thought it might be more interesting to see and/or hear a movie. I thought I could easily get our previously-owned DVDs converted and onto the iPad, but it took more work than I expected.  After a few hours of reading different forums and experimenting with the giant files for movies, I was able to get it done for free...somewhat illegally.  It involved blocking the copyright and converting to MP4, then hours and hours of upload time.  I'm not going to post how I did it here, but suffice it to say it can be done for free, and Finding Nemo is now available on her iPad.  ;-)

We are very grateful for this tool, thanks to Children's Wish Foundation International.  Scarlett still qualifies for other wish-granting organizations once she's a little older, and we're hoping she's able to ask for something that truly makes her happy.

Spectacular gift for Scarlett!! And it looks like she's enjoying it already!
So glad you were able to get this for her.

That's awesome! I'm sure Scarlett will put that iPad to good use. Also, thanks for the app suggestions too. I've got a 19 month old.

My favorite iPad app for kids is the ABC starfall app. So much songs, letters, interactive games, and overall great, though I'm not sure she'd be too interested in that yet. My almost 2 year old loves it though and has since about 14 months old.

What a great organization and I can't think of a more deserving recipient! Love the list of Scarlett's favorite apps! We recently got an iPad but so far my 4 and 6 year olds have been finding all the apps. Going to add some of these for for our 20 mo old...he loves pounding the screen so I am sure he will have a blast with them!

BabyFirst TV is an app that is wonderful for a quick diversion. It's cute and educational. -and the Lite version is free. :)
I'm sure the iPad will prove a godsend with a post-surgery toddler!

Kaitlyn has her very own IPad thanks to grandma. Scarlett is going to love it.

When we had to take Owen to the allergist one of the ladies was nice enough to let us play with her iPad while he was getting the nebulizer treatment. She had an app called Baby Einstein's it is mostly music - but it is a great waiting room distraction. I downloaded it on my phone recently.

Audrey, 17 months loves our iPad. She is just about potty trained due to it!! Not out intention, but hey what ever motivates her.

I love, love, love your cover. I hope she has fun with it. I hope that you also have some fun with it! Oh and both my girls love face time and the camera. Take some videos of her and play them back!

Love! Riley's favorite is peekaboo barn. There is a free lite version but if you buy it you can record your own voice! Check out verbal victor too ;)

This is why it is far better that you simply applicable investigating well before building. You can actually design more effective share in such a manner. Medicines