It has been a very long, very tiring two days.  Bottom line: Scarlett now has a VP shunt.
We were discharged from Stanford Saturday morning.  Sunday we spent the day visiting family.  I'm so glad we go out a little while we could.
Yesterday we were due back at Stanford for blood work.  It took 4 hours to get cleared to leave, as we got trapped waiting for Scarlett to provide a urine sample.  First of all, she isn't eating much, so to get any urine, I had to get her to eat in spite of her nausea.  Then, I had to actually collect a clean sample of the resulting urine.  This is hard enough for an adult (I know - when you are pregnant, they make you give a sample at every appointment.  Details aside, it is hard to aim for the cup the further into pregnancy you get...); but to collect a urine sample from a baby is particularly challenging.  We use cotton balls in her diaper that are squeezed into a specimen cup.  Unfortunately, to catch the cotton before it gets pooped on is harder than one might expect.  It requires constant vigilance.  But, we eventually did get it and Scarlett checked out well, with her blood counts showing she was ready for chemo.
We had scheduled a quick MRI in Oakland before being admitted for chemo at Stanford, just to check her progress.  So, this morning, I planned to wake up early to get us clean, dressed, fed and to Oakland amid the morning commute traffic.  The little lady had other plans, as usual, so she woke up an hour before my alarm went off to nurse.  So much for the alarm!
The MRI was delayed and took a while to even happen.  We then waited in the neurosurgery clinic as her surgeon, who was in another surgery, checked the scan and decided that there had been a change, and it was shunt time.  We knew he had anticipated it, but we had hoped to hold out a while longer....but of course Scarlett always has her own plans!  So, when they decided to sneak a shunt placement between two other neurosurgeries today, I wasn't too surprised.
The surgery was short and easy.  She was awake and alert before we even got to the recovery room.  The shunt is placed on the left occipital (rear) part of her head, and leads to a long tube that drains excess cerebral-spinal fluid from her brain to her abdomen where it can be reabsorbed.  As far as I know, she will always have the shunt.  It will extend as she grows and can be adjusted as needed.  It definitely adds a challenge for her, but shouldn't hold her back from doing what she wants when she is older.
The most difficult element of this is that, because she still has symptoms of RSV (a runny nose that makes her sneeze), we are on contact precautions, which means gowns and masks for everyone, including us.  This means I have to sleep on the fold-out chair with a paper mask on in a fully-lit PICU. I tried to say I didn't need a mask because I had been exposed to her for two weeks, but "it's the rules."  No further discussion for now; I'll try with new doctors tomorrow morning. 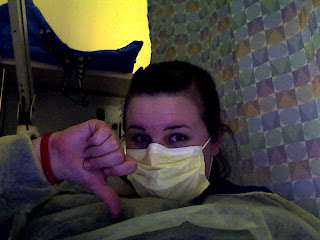 We are hoping she is ready for chemo again in a week or two, after a few days in the hospital to recover from the surgery.  Good news is that the doctors saw no signs of major tumor growth, so we are still in good shape there.  A new resident in the ICU, who didn't see us before, again called her MRI images "impressive"... I think this is a strange way that they try to communicate with us, as though we should be proud of her for having such a massive tumor.  I know they don't mean it, but it is surreal to talk about it that way.
It's just another bump in the road.

P.S. - Thank you to Beth Stutzman for the crab quiche!  It's taunting us in the freezer until we can eat at home again.  Someone asked how to get on the meal schedule;  e-mail sandjgarrett@comcast.net.
Posted by Brandi Wecks at 9:34 PM

Hi I have been following you guys from BBC, I am a pediatric nurse in NC. If you are sleeping more than 3 feet from Scarlett you shouldn't have to wear the mask, thats as far as droplet precautions should have to go.

Hugs! Too bad she had to have the shunt, but it will be good for her on the other hand..
Hope she gets over the RSV soon, my little one has had a cold forever and is finally getting over it.
They mean well saying the MRI was impressive..I see it as a good thing for them to say!
Continuing my prayers! My baby Scarlett bracelet makes me smile every day I see it..

I am not a religious person but I very much pray, wish, dream, hope that Scarlett makes a speedy recovery. She's a strong girl now, just imagine how unstoppable she'll be in the future! And you too! Sending your family very warm thoughts and wishes from England.

My sister has a shunt from a few brain surgeries in her youth (now is about to have her 2nd baby, has a masters degree, hubby, house, and amazing job making life saving drugs - always good to hear amazing sucess stories of adults, I think!)... just something she had problems with, make sure they map the location of the shunt. No one did that for my sister, and she has a huge risk if she has a c-section. They don't know where the shunt is exactly, so don't know where they can cut to get a baby out (I'm sure it would be the same for an appendectomy or any other abdominal surgery). It's something she says she wished she knew, so I figured I'd pass it along! Know exactly where the shunt is and it's route so you can provide it to future doctors!
Praying for Scarlett! You guys are amazingly strong, awesome parents!

Hugs Mama!! And Daddy!! And precious Scarlett!!!
Just wanted to stop in and give you some cyber-love!!! You guys are doing great, thank you for keeping us up to date on her progress! :-)

You have our prayers. I hate that she had to have the shunt but I know that God will take care of her. Praying that all goes well with everything that you all face and the next round of chemo.

Hi I also follow you guys from BBC and pray for you all often. I just wanted to add that my 8 year old nephew also had a shunt put in when he was a baby (complications due to being born at 24 weeks) he is doing wonderful (he's a little spoiled:), but wonderful, he had to have it replaced once, but it was pretty simple, and he woke up asking for wrestlers (he is crazy about those toy wrestlers:P) Good luck We are all thinking of you!

I also started following you on BBC. I just want to let you know I think of you guys often. My baby was born then end of August and can't imagine what you guys are going through. You and your husband are amazingly strong people! Scarlett is a gift from God! I am not overly religious but do believe we can overcome anything the big guy hands us with his help, others love and prayers. I pray for your family often. Thank you so much for sharing your tears and joys with us. There are times when I shed a tear reading your blog and others make me smile. Stay strong, your baby needs you!

I first heard about Scarlett on BBC.
I read your blogs all the time from the beginning and please know that we will ALWAYS be praying for the little butterfly and you and your husband.
God Bless you all. And know that there are people in Boston, MA rooting for you and baby Scarlett and sending prayer and good vibes.

Cute picture of you in the mask nonetheless! That's rough having to sleep with the precautions wear though. And that resident...hmph. He should know better!

Take care & may God watch over your family
*hugs*

PS- Good luck with the chemo and her recovery from RSV & the surgery. As I've noted before, she's a fighter that girl :)

The shunt is too bad but it shouldn't affect her life too much. I have a dear friend who was also born with a brain tumor and has had a shunt all his life. He has still been able to accomplish everything he has ever wanted in life, including getting his master's degree. He has touched many people in his life as your daughter has, and will continue to do so. Our thoughts are with you!