Not much has changed or happened in the last few days.  Scarlett has some mucusitis (mouth sores) that we are treating with a new medication that seems to help.  We are waiting for her chemo to clear her system; blood levels are still high, so I don't expect it to be clear until Monday, which means we'll just stay to start the next course on Tuesday or Wednesday (I made a deal with the doctors not to send us home for less than 2 full days - I'm not sure I could deal with packing up and going home with just enough time to wash everything and come right back.)
Yesterday we got to see her latest MRI.  We knew it was clear and clean (no tumor!!), but we wanted to see it.  It is AMAZING how well she functions when you see that MRI.  Where the tumor was...is just a hole, about the size of an apple, I'd guess.  Her right hemisphere has expanded a little, so the midline is almost centered.  There is some remaining left hemisphere tissue in the frontal, temporal and occipital lobes.  Other than than, it's just a hole filled with fluid.  We got confirmation (or reassurance, maybe?) that the tumor grew with her brain in utero; the left hemisphere never developed fully.  Maybe our fascination with these images is a bit morbid, but seeing it makes it so much more concrete and easier to understand (I'll get an image to put up someday.)
During this meeting, we also discussed the next steps with her hearing.  The neuro-oncology team was very surprised to see such loss in such a short time; with the unexpected complications of the infection and need for antibiotics, which all contributed to her hearing loss, she lost a lot of hearing in just two months.  She has other confounding factors as well, like the thin and missing bones on the left side (which will grow back eventually) that don't allow the sound to resonate properly in her head.
Good news: She may regain some hearing.  We are changing her chemo plan a little to use a less ototoxic medicine (which may also be easier on her nausea - yea!).  However, from the current test results, she will likely still need the hearing aids.  This doesn't really bother me too much, though I can't imagine how you convince a toddler to keep hearings aids on!  We will have another hearing test in a few weeks to confirm and remeasure, since the infection and antibiotics will be clear by then.  Hearing aids will be fitted and in place by the end of June, we hear.
The best news for little miss:  we are beginning cereal!  I am not sure why this is so exciting for new moms - it's messy and takes time to organize, but it is so rewarding to see her eat!  She's not a big fan yet... 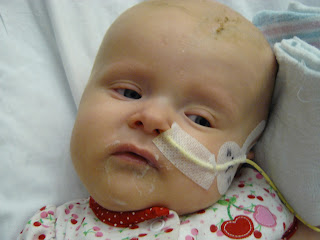 ...but she's tolerating the cereal and my goofy encouragements.  Her occupational therapist felt she was ready and wanted to see if she could handle it, and I think she has done great.  They are encouraging us to keep it simple and fun, not to expect too much too soon - they are calling it "recreational purees".  It's great to see her doing well with something that other 6 month olds are doing!
Posted by Brandi Wecks at 10:25 AM

Oooh, do avocados next! The why-are-you-poisoning-me-Mommy face is my FAVORITE! Our little man still does that when we give him avocado, even though he eats it up like he's starving!

My little guy is 6 months also, he loves rice cereal and recently we decided to try bananas, which, are his new FAVORITE! We started solids just for fun too, he was very satisfied with breastmilk alone, but it has been fun for us to see him get excited when he sees the food processor come out to puree his bananas! lol Good luck with solids and have fun!

Yay for solids!! Glad to hear she is doing well. She looks so pretty in this picture - even with the messy cereal. :)

She is so beautiful! My daughter is 6mo and we are just starting solids as well. She is often less than thrilled to eat them too :) So super glad to hear how well she is doing! Such a strong strong little lady!

Glad to hear about all she is doing and how well you seem to be holding up. God is there for you and I hear His voice each time I read one of your entries. You remain on my heart and in my mind,

God Bless you and your family.

My LO hated the cereal, but once we started doing fruits, oh man! She couldn't get enough! Here's to Scarlett's exploration of the world of solid food! So exciting!

I started my Son on Solids today too. He started with rice cereal and is not really a fan of it!
My nephew is partially deaf and he has been wearing hearing aids since he was about 2 years old. They never even seemed to bother him.

You may want to check out the hearing problems board on babycenter. Lots of help including how to keep hearing aids on. I have a son with moderate hearing loss. And being in California, you can check out the John Tracy Clinic (I'm jealous you are closer than me!)

Look into the pilot caps sold by Hanna Andersson (you can find them online). $10 each, then you're sweet girl can't get at the hearing aids. My son is 5 months old & has hearing aids for a moderate loss. Without the pilot caps, the aids go right in his mouth every time!

I prefer silka wear caps but if you are crafty you can make your own. We didn't even worry about aids until all the chemo was finished and hearing tests were stable but from that point it took us an additional 3-4 months for Riley to wear them without pulling them out. Now he does great and I don't even have to use the elastic band if I don't want!

What fun news that she is starting to eat cereal! What a sweet picture....I think she looks alot like you in that picture!! :) My son is 8 months old and is not a major fan of solids still. I started at 6 months and it is certainly hit or miss with him....sometimes he'll eat a whole jar and sometimes he eats a few bites and he's done!! I hope Scarlett will be a good eater and really take to the solids!! I am thinking of you all often and praying for you guys as well!

I really need to send you a picture of my son! I think he and scarlet look alike! And I'm not just saying that because "all babies look the same" lol! Rodney makes the same face Scarlet is making in her picture. However, he's not eating, he's pooping! Keep up the good work Scarlet!

How awesome to start solids! That cereal is yucky, I bet when she moves on to more palatable foods, she'll dig in! What a precious baby you have... I don't know anything about hearing aids, but I've seen a lot of toddlers with glasses, and I have a feeling that they just get used to stuff that they have to have everyday, especially if it aids them.

I love checking in on you guys...I get so excited when you post a new update and I thank you for sharing Scarlett with us!

yay for another food!!! She will begin to love it!! Logan is 7 and a half months and didnt like it when he was 4 months. we started again with cereal at 5 months and hes loved it ever since!! Go Scarlett go!! Loveeeeed the pic btw sure is amazing to have a pic of a small fighter!! So inspiring!!

You will enjoy watching Scarlett taste test new foods... that's the fun, not the messy part (well, actually, that's pretty cute too to catch on camera!). I am so happy she is doing well. I keep praying for your family. ~j

Mix the cereal with some pears or applesauce...makes all the difference in the world. And it's the only way either of my kids would ever touch it.